That was the question we wrestled with for weeks after we returned from Bundibugyo, and had been wrestling with for months prior to that.  We had an eventful trip and met wonderful people, so it wasn’t like anything immediately turned us off on the idea.  But we also never had a lightning bolt moment where we both turned to each other and gave that, ‘You feeling what I’m feeling?’ sort of look.  Except one night when there really were real lightning bolts seemingly feet outside our windows and it felt like the Rwenzori mountains were bombing us overhead, but that’s another story altogether.

So how would we know that God for sure wanted us to take this leap?  How do you truly know God’s will with humongous decisions like this?  Well, you go to Philadelphia apparently – the City of Brotherly Love, the city of Benjamin Franklin and the Liberty Bell, and world famous cheesesteaks.  At least that’s what we did.  In September, Alexis and I flew to Philadelphia to attend Serge’s ‘Assessment and Orientation’ week.  Serge is the mission agency we’re partnering with, and their headquarters are in Jenkintown, PA, just north of Philly.  We still didn’t know if we were set on going to Uganda, but we figured if we could really focus as a couple, pray, hear from the organization, meet other prospective missionaries, and connect with former missionaries (many of which previously lived in Bundibugyo), then maybe we’ll find some clarity.  That week was instrumental, in fact paramount in our coming to a Yes decision to uproot our entire life and move to East Africa.

In my past, I’ve experienced multiple occasions of having a deep sense of knowing what God wanted me to do.  Only one time it was in a literal dream, but all the rest were just a confidence, a calm, a deep knowing of what God wanted me to do specifically.  This was nothing like that.  Probably because it so thoroughly impacted not just me, but my wife and kids as well.  So uncharacteristically, the two of us had struggled to get on the same page leading up to Philadelphia – one day I’d be gung-ho and she’d be hesitant, the next day she’d be on board and I’d have cold feet.  This went on for weeks.  We felt like the lack of confidence, the lack of a clear sign of sorts was our sign to not go.  But Philadelphia changed all that.

To be clear, there wasn’t a sign or lightning bulb moment there (complete with Ben Franklin’s famous kite, though that would’ve been cool).  The Liberty Bell did not levitate from it’s stand while its crack mended in front of our very eyes, a sure sign we were supposed to move to Africa.  But the Lord just kept chipping away at our hearts – hesitant, unsure, fearful in many ways.  The conversations and the work of the Holy Spirit that week changed all that, and brought us a unity we had been desiring for months really.  It was beautiful, we even recorded ourselves saying Yes to each other, just so we could look back on it later when we were unsure again or feeling discouraged.  We knew that was a foregone conclusion.  But for the first time, on that Tuesday night in September, in Philadelphia of all places, we said Yes to each other, and to God.  It was like we were getting married to the idea of Uganda, but without any cake or fancy clothes.  Just us, in our sweats at a host family’s home, eating a Reeses Peanut Butter Cup, saying Yes, let’s move halfway across the world and we can’t change our mind any more! 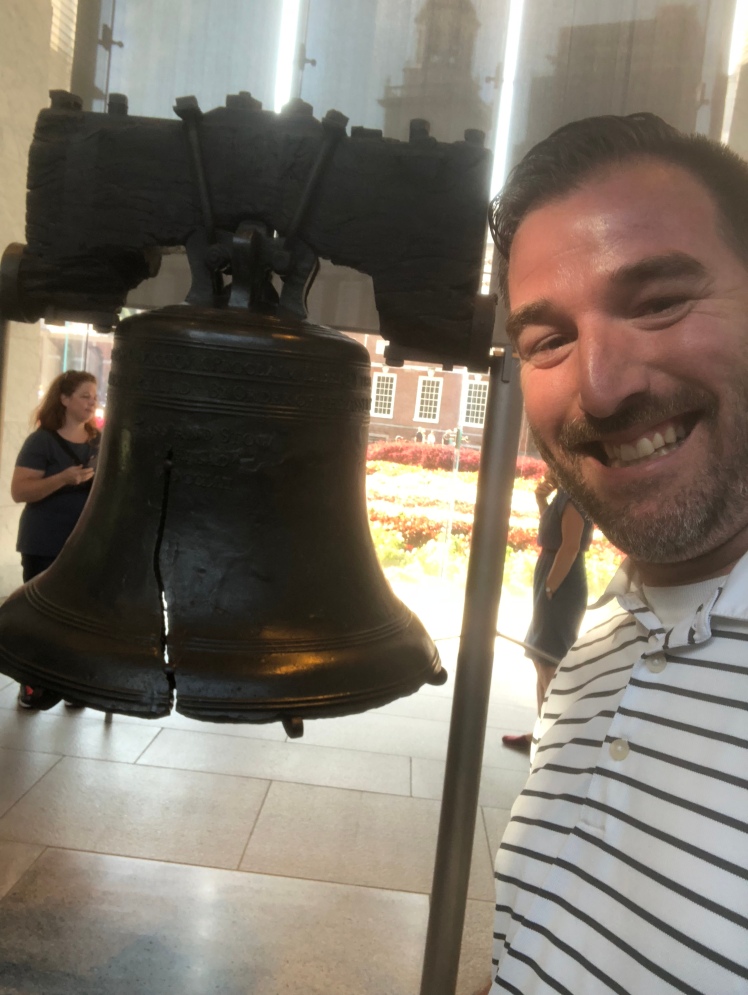 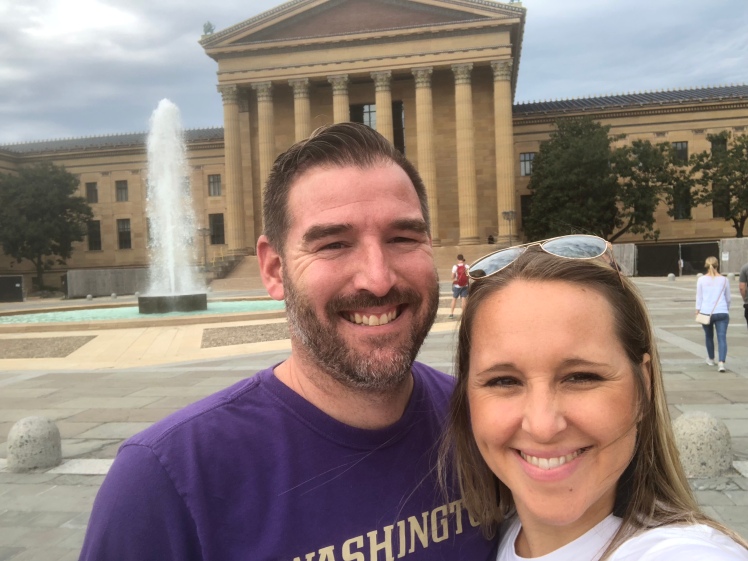 So how did we determine God’s will for us in this decision?  Well, like I said, it was not through a dream, or a vision from Heaven.  It was however through months of stories, conversations, and confirmations that coalesced into a solid peace to at least keep taking the next step.  We had been praying for months that God would give us unity and clarity.  As we were talking to the regional directors of East Africa at Serge one day, who’d lived in Bundibugyo for 20 or so years and now live in Kenya.  We asked them to pray for clarity for us and they shared something that profoundly struck and stuck with us.  She pointed out that almost everyone in the Bible – Abraham, Moses, David, all the disciples, you name it – were not given clarity by God.  What they were given, and in fact what we needed and had started praying for after that conversation, was COURAGE.  Courage to take the next step, courage to trust our sovereign Lord who had been so faithful in our past and in history, courage to know that He promises never to leave us or forsake us, and He will be with us wherever we go – nowhere on this earth is outside His covenental reach.

Was moving to Uganda to serve a good thing?  Yes!  Was staying and continuing to serve in Lynden and Whatcom county a good thing?  Yes!  I heard a story about a father whose kids asked if they could play out in the backyard.  He said Yes.  They went out and had free reign on all the toys and activities.  They didn’t ask him if they could play basketball, or if they really should play with the Nerf guns.  They didn’t question every decision about whether they were supposed to go on the trampoline or really were supposed to play “farmers” in the dirt patch in the corner.  So long as they were in the father’s backyard then they had the freedom to decide, they were in his will.  Now had they snuck out the fence and gone down the street, or started playing dodgeball in the road, then they’d be out of his will for sure.  But they had asked to play in the backyard, it was fenced and he was watching over them, surely any toy or game they chose back there was a good choice that brought joy – to the kids and to the father.  Now every analogy starts to break down at some point but we began thinking less about is this the one thing we’re supposed to do, and more about is this a good thing that we should pursue without fear and major hesitation.  Our Sonship mentor, a pastor from northern California, shared with us some handles to hold onto when thinking about God’s will, and we filtered this decision through them.  They come from Tim Keller’s book, “God’s Wisdom for Navigating Life” based on the Book of Proverbs.  They were:

We began to realize, after months of vacillating about the decision and wanting clarity, that in a myriad of ways God was in fact making it obvious all along.  It was our own fears, insecurities, and all the unknowns that clouded our vision.  We still didn’t know all the details and how it will all work out, we probably never will.  But we now knew that for sure God was asking us, like he asked Joshua leading the Israelites, to step into the Jordan River and trust Him.  Unlike Moses leading the Israelites away from Pharaoh and his army, the water didn’t part and then they walked, or more likely ran through.  I’m not saying that’s a phenomenal miracle and would be amazing to see and be a part of.  But with Joshua leading God’s people to the promised land, he told them to cross the river and they had to literally step in the rushing waters, with their wives, children, and livestock.  Essentially all their loved ones as well as all their wealth.  It seemed unlikely that this would turn out well, that they could just wade safely across the rushing river.  But they trusted in God their Father, and they stepped into the river, and you know what, at that very moment the waters parted.  They walked across on dry ground.  I find this story inspiring and illuminating.  Yes, it took crazy courage for the Israelites to take that step.  But it also highlights how God, in His sovereignty, doesn’t always (if really ever) give us all the details, the roadmap, for where he wants us to go.  It’s in the journey, and we have a Father who guides us, loves us, and is so, so good.  So we feel like He’s asking us to take a step into the river.  We don’t know if the waters will part and we’ll walk through on dry ground.  We don’t know if we’ll have to swim instead, or lose a few figurative camels along the way.  We’ll probably end up wet and cold.  And we don’t really know all that waits on the other side.  But we do know that God will never leave us or forsake us, and that He is a good, good Father.  So with that assurance, we’re putting one foot forward into the uncharted waters.