A few weeks ago, a team of CSB staff and myself interviewed 19 students.  It was unlike any interviews I had conducted before, with either adults or children.  These were 19 of the 109 S.1 students who were going to be joining Christ School Bundibugyo this year.  And these students had made it through the first round of the selection process for a full scholarship. Though our mission organization, Serge, provides half of the funds for every student that attends CSB, they also provide FULL scholarships for 10 students in each grade level.  This scholarship amounts to about 2.7 million shillings for the year (or $750). In S.1-S.4 that goes to the neediest students, called “Orphan and Vulnerable Children” (OVC).  Technically speaking here, this means that one or both parents have died, OR that circumstantially the financial situation is extremely dire for one reason or another.  Students who need this scholarship but do not receive it will be hard-pressed to come up with enough money to enroll at Christ School, and if they did would most likely not continually find the funds to complete 6 years here.  So how do you decide who deserves this golden ticket of opportunity?!  My heart was heavy and burdened for these decisions.

As we called children into my office one by one, their stories emerged quietly and soberly.  Though I focused on taking copious notes in my lap, my heart was grieved at the narratives of these young ones.

-One girl shared that her mom had abandoned her about ten years ago, and that just last year her father was beaten to death by street people in Kampala.  She’s been living with her grandmother. She wants to be a lawyer.

-Another girl said her dad had died when she was three years old of a disease she didn’t know, and that her mom had left her with her grandma soon after.  She wants to be a nurse.

-One boy said his father died of malaria when he was one year old.  His step-father is a poor peasant farmer. He wants to be a doctor.

-Another boy said his father died of a heart attack 4 years ago.  He said his mother is a peasant and doesn’t manage herself well. He wants to be an accountant.

–A girl said she is one of ten children and her dad died of cancer 5 years ago.  She wants to be a nurse.

-One boy said that his father died a couple years ago of tuberculosis.  His mother had left the kids for a new husband and he was living with his uncle, who has 9 kids of his own.  He wants to be a doctor.

-Another boy said he is one of 12 children, and that his father was killed 3 years ago in a tribal conflict.  He wants to be a Businessman. 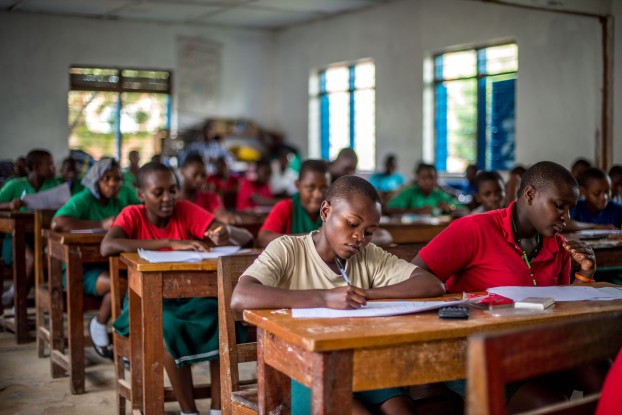 I wanted to reach into my briefcase with an imaginary wad of cash and give it to all of these kids.  And to weigh down my heart even more, when I took a deep breath and zoomed out on the situation of students, I recognized that virtually every child in Bundibugyo is vulnerable!  We had been trying to compare apples to apples in terms of their need, but if the entire orchard is struggling to grow, it’s still relative.  Even the ones that we determined didn’t “need” the scholarship, or those that didn’t apply because they didn’t see themselves as that needy, were still one bad cocoa harvest, or one inexplicable landslide away from being absolutely destitute.  Very few in Bundibugyo own much in terms of assets. Many have no savings accounts, no IRAs. There’s no scenario for when ‘the going gets tough’ they could just get rid of a car loan, cut their cable subscription, shop less at Costco, or discontinue buying designer clothes or daily lattes.  They are already living right on the brink, day to day, almost meal to meal. Even if they could pool all their resources to get school fees for this one kid for this one term, they would still be considered in abject poverty by American standards. So how do we so confidently say, “This kid really deserves it, but that one will be okay”?  Yet, those were the decisions that we faced because there are only so many funds to go around.  And as excited as I was to award the 10 scholarships, I was also heart-broken to say No to the others, knowing that this would be a life-changing gift that they were missing out on.

There is a consistent command in the Bible, straight out of God’s heart, to care for the orphans and widows.  To be a father to the fatherless. That is at the heart of Christ School Bundibugyo – to bring children in and care for them by protecting them, discipling them, feeding them, giving them a family and a community and an excellent education.  In fact, several current CSB staff members have benefited from the OVC Program, went on to higher education, and came back to serve their community through education.

Pray that God would bless us to bless them, and that each and every child would feel the love of the Father, who brings every Christian into His family and calls us “sons and daughters”. May we be a testimony to that grace for as many children as is financially feasible.  And would you please consider supporting this fund, that we may provide care and education for even more orphans and vulnerable children in Bundibugyo: